Beginning immediately the new law requires a qualified newspaper must:

Why are public notices an important part of a democratic society?

They are the third leg in the stool of “open government” they serve to keep the citizens of Michigan informed about the actions of their government.

What are the elements of public notice that make it so valuable to the citizens of our state?

An important premise found in federal, state, and local governments is that information about government activities must be publicized for people to make well-informed decisions. Public notices provide this sort of transparency and accessibility to citizens who want to know more about government actions. Providing public notice provides the opportunity for the public to influence governing bodies and allows the public to be an active participant in a democratic society.

In a recent Marketing Resource Group Poll results show the public trusts newspapers to provide notice to the public on important matters:

63% of the respondents felt newspapers were more effective in making government activity known to the public.

MPA Members: For more information on MIPublicNotice2.0 Login to "members only"

In Michigan, there’s a difference between "Legal" notices and "Public" notices.

Read the Michigan Definition for Newspapers

Newspapers can charge competitive rates for public notices. Michigan Press Association has compiled a list of the notices that local governments and school boards are required by law to publish, and the laws requiring it. For example: meeting synopses, invitations to bid, budget hearings, etc. Members can read the Michigan Public Notice Requirements to get a chart that answers those questions. 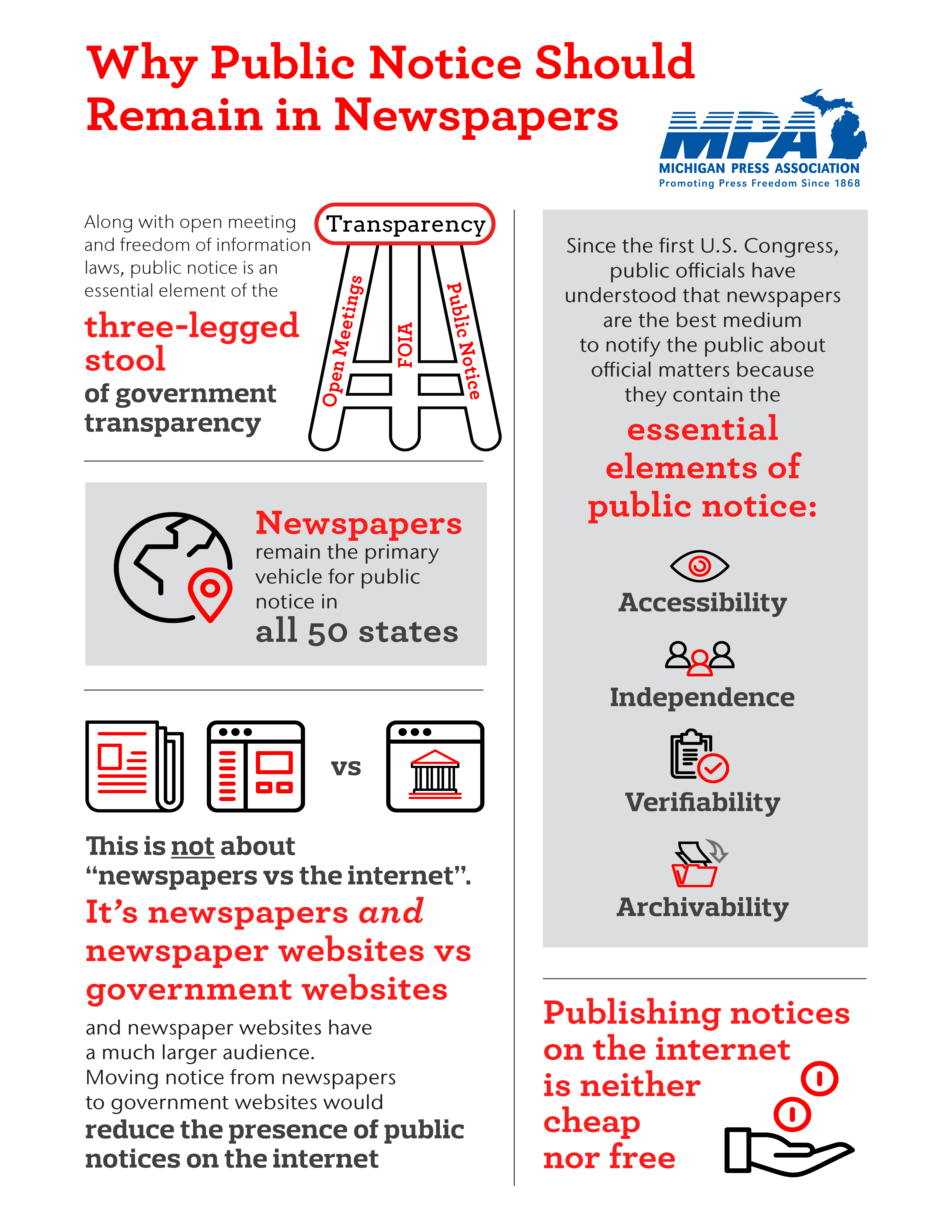 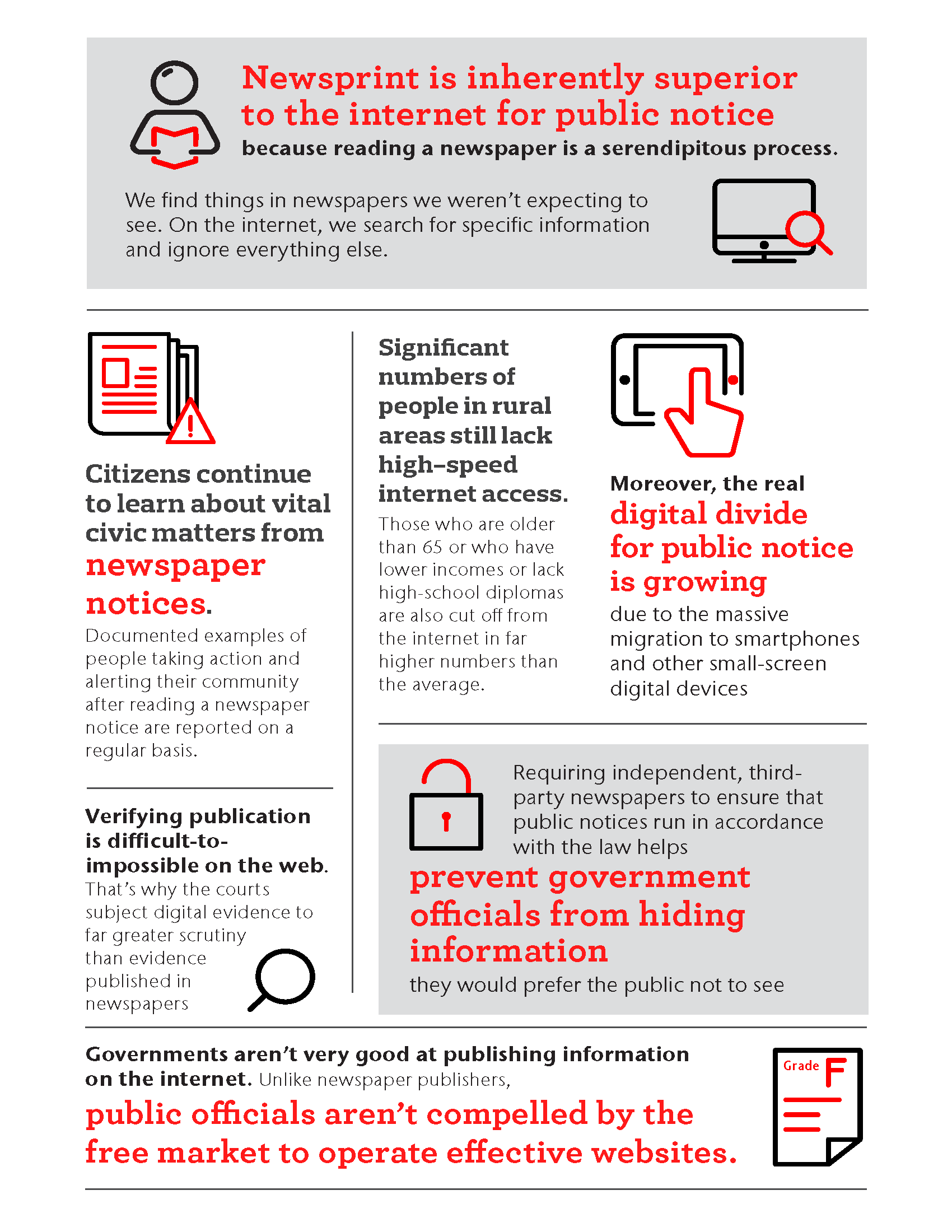 Why Public Notice Should Remain in Newspapers

Read the DOs and DON'Ts of public notice publication for newspapers

We have developed ads for use in your newspapers to promote the need for public notices.

Michigan law sets the maximum rate newspapers may charge for a "legal notice" (i.e. an "order, citation, summons, advertisement or other matter arising out of judicial proceedings). The chart below shows the rates beginning March 1, 2022, BUT NEWSPAPERS MAY CHOOSE TO CHARGE A LESSER RATE TO COMPETE FOR LEGAL ADVERTISEMENTS.

Newspapers should also note state law does not control the fee for providing an Affidavit of publication. Therefore, newspapers can raise affidavit fees independent of the statutory requirements for folio rates. This chart is for “legal” ads effective March 1, 2022.

Folio Definition for Publications in Michigan

A “folio” as it pertains to the Michigan statutory rate is 100 words. The common or historical method and rules for counting words in a notice is as follows:

Each numeral is counted as a separate word. Do not count punctuation marks. Start counting at the beginning of the notice and count until the end of the notice. An example of how to count a street address such as 1234 S. Main St., Detroit, MI 48226 would be 14 words. When counting a notice, if the count of words is over into the next folio, that’s the number of folios, i.e. 105 words would be 2 folios, so would 195 words.

This chart is for “legal” ads effective March 1, 2022. Under the statute, you can charge $56.95 for a notice which must appear 1 time, and $76.20 for a notice which must appear 2 times. The above changes do not include an affidavit fee, which is independent of the statutory requirements for folio rates. This chart was compiled by MPA, which based the data from MI Department of Treasury.

If you have any questions regarding this chart please contact Lisa McGraw at MPA: 517-372-2424.
Download the Expanded Chart