Beginning immediately the new law requires a qualified newspaper must:

To register for the Public Notice 2.0 database, please fill out the form below and attach your agreement

If you need support with the sign up process, please email questions to [email protected] 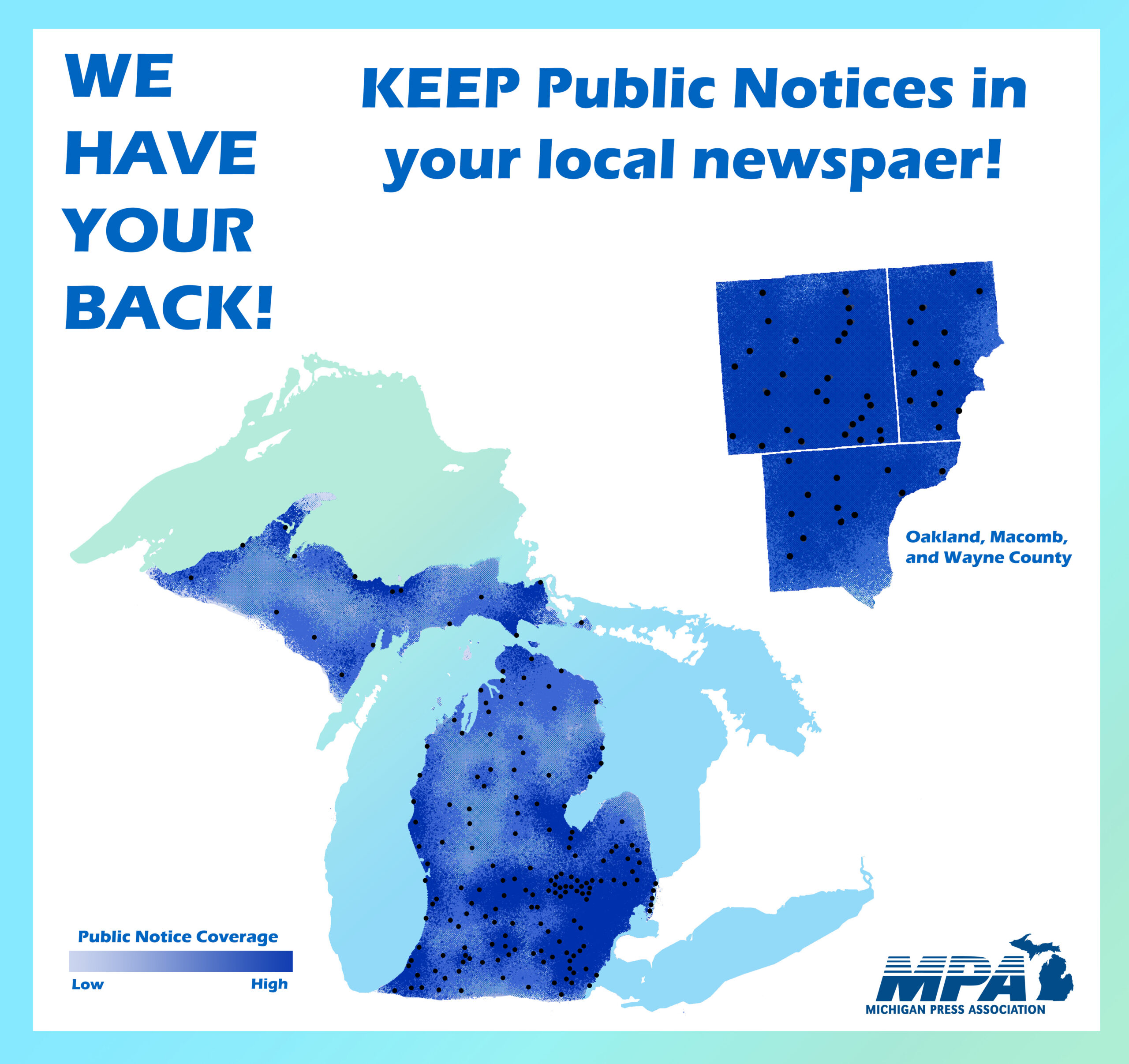 Why 2.0? Michigan Public Notice 2.0 is an MPA partnership developed to address the ongoing issues raised by legislators regarding people using digital devices more and perception of the waning of print newspapers. Public notices have traditionally been printed in newspapers and should continue.

Why a public notice statewide database? The newspaper industry recognizes the critical importance of public notices in print for the permanence and archival record of what occurred. The time has come for a digital searchable database as a compliment to help citizens locate the source of a permanent record but still preserves the print copy.

Why Now? We have work to do, newspapers are on the defensive with multiple bills every year in legislatures across the country. With opponents like the Michigan Municipal League and the Michigan Townships Association are more motivated to save money than ever before, and they truly believe posting their own notices on a local government site is a way to achieve that. MPA believes that a permanent legal record produced independently is important in maintaining the integrity of notice.

What will make it successful? Participation by all newspapers in Michigan. To make the database work it needs all legal and public notices entered. In addition, all newspapers need to have the published notices available on their own website. To depend on government websites allows the fox to watch the hen house. One independent statewide source of online notice provides an easy way for citizens to search for the information they’re looking for.

Who will benefit? The public. They will have access through the newspaper which will not change and a searchable database that will let people outside the circulation area to view the notice. It would allow easier access to a company to learn about projects seeking bids potentially making the process more competitive and saving the tax payers money.

How can I afford it? One newspaper focused on the per insertion cost to participate. After reviewing a month of public notice revenue realized the fee vs. revenue was doable to help ward off the government entities and legislative efforts to take public notices out of newspapers. Can Michigan newspapers afford not to support a statewide database?

To register for the new Public Notice 2.0 database. Can you please register on the web site (let me know when completed): https://mipublicnotices.com/#/ There is a link in the upper right corner. Once registered I will get things setup If there will be more than one user registered I will need to know which email you would like to use for the admin/billing acct You will receive a notification that is was setup then an activation email that you can enter your billing information
✕